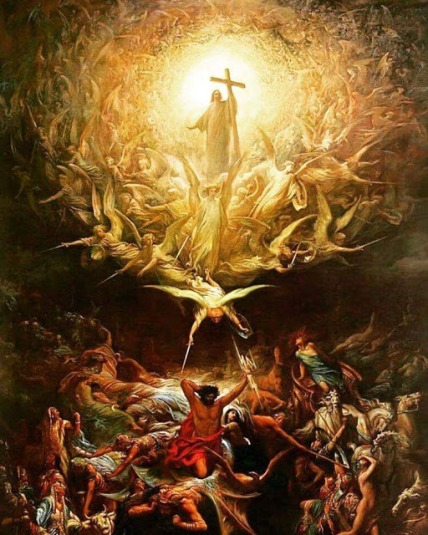 The Diocese of Springfield Illinois has created a new fraternal group to help support and grow the faith of men in its diocese. The diocese calls this group Legion of Valor and invites the men of our diocese to “close ranks. It’s time to pull up from the grind and gain some much-needed perspective. It’s time to take stock, to recharge, to refocus. It’s time to re-engage our mission as Catholic men.”

During the weekend of September 28th-29th, the topic of discussion for the Legion of Valor was “Entering into Spiritual Warfare.” The keynote speaker for the weekend was Fr. Sebastian Walshe, O. Praem. After the opening prayer for the weekend retreat, Mike Christe, Director of Evangelical and Catechetical Services, challenged us all to foster into our own prayer lives the prayer of the Church—the Liturgy of the Hours. Christe explained that through his own life he’s learned the value of prayer by experiencing the fog of battle in the spiritual battle. It was only when he revamped his prayer life that he was able to pierce through the fog with his prayer serving like night vision goggles. All Catholics needing to cultivate a foundation of prayer, Christe called us to participate in this vital battle by going to morning prayer.

After morning prayer, where the men learned how to pray the hours in community, the men were introduced to Fr. Sebastian Walshe, a Norbertine, from St. Michael’s Abbey in California. Fr. Walshe instructed the men that as Catholics we need to learn and be reminded that there are three distinct battles within the very real war of Spiritual Warfare.

The conflict in this war is between two armies and the combatants are spiritual. Fr. Walshe explained that the spiritual can become visible in extraordinary manifestations such as oppression, possession, and obsession and voiced the concern of the growing trend within the Catholic Church expressing that Satan is merely a symbolism in the world. Fr. Walshe gave one particular example of the Superior General of the Jesuits claiming the sentiment and informed those at the retreat that the Superior General is either “a fool or something worse.”

One important aspect that spoke to me is that Fr. Walshe said that the most concerning aspect in the spiritual life is those who feel that they are okay. In their spiritual life, they do not feel any discomfort nor the pull of temptation. If we’re trying to live a life of holiness we should be aware of the stress of the able, the pull of temptation, and we should feel uncomfortable. Fr. Walshe went into a bit about fasting being a tool that allowed us not to be subject to the flesh and that abortion and the death of children is diabolical in nature because the demons do not want souls to replace them in heaven.

After the first talk ended the group broke for mid-morning prayer and mass. The mass was celebrated in the ordinary rite with the mass parts sung in Latin. It was offered by Fr. Dominic who served as the retreat’s Chaplin. The mass fostered a sense of reverence and was extremely moving hearing the packed chapel full of men chanting the Latin parts of the mass—an experience not easily forgotten.

The retreat broke for lunch after Mass.

The second talk given by Fr. Walshe was on the Virtue of Humility and the power of it. He reminded us that humility is the acceptance that God is in control of our lives, not ourselves. We should reject in our lives the spirit of discouragement and despair when trying to live a life of holiness—that the demonic are often behind these thoughts and we should openly renounce them. Fr. Walshe explained to the group that ultimately our goodness and holiness is given by God’s grace that whatever holiness we’re living it’s because we’re being held up by Christ and the Blessed Virgin like a child holding the hands of their father and mother.

Men must also reject false humility such as denying the goodness of God working through ourselves. For example, someone may give us praise and if we respond that we’re really nothing special we’re participating in false humility. Our response to praise should be “Thank you and thanks be to God, Fr. Walshe said. We also need to avoid the smallness of soul of thinking that we cannot be a great saint or that someone is better at something we’re called to by God. Rather what men should strive for is the virtue of magnanimity and desire to be worthy of the call. God wants us to do good things; he wants us to order our will to his own.

Fr. Walse explained to the men of the Springfield Diocese in Illinois a fantastic exegesis of the Parable of the Servants. He challenged us men to take risks for God. We cannot take the grace given to us by God and bury it out of fear of his wrath. What is striking about the parable is what the parable doesn’t ever say. Fr. Walse explained that any of the persons given talents we’d expect one of them to fail, but none of them do who take risks. We need to put our trust fully in God’s plan for us.

Fr. Walshe gave us ten steps to incorporate the virtue of humility in our spiritual lives:

1. Obedience
2. Confession—and hold nothing back in confession.
3. Make our defects public
4. Prefer the common good over our individual good
5. Accept unjust accusations—be confident and do not concern yourself with them
6. Be grateful for truthful correction
7. Do not be troubled by other’s faults; Jesus is the judge.
8. Think and speak well of others
9. Rejoice in our weaknesses and celebrate other’s strengths
10. Perform the mundane and meaningless tasks with joy.

The final short talk of the day was given to us on the weapons for Spiritual warfare which are offensive and defensive:

The Offensive weapons: prayer, fasting, the word of God, saying the name of Jesus and Mary, sacraments, and sacramentals.

The Defensive weapons: faith, hope, forgiveness, well-ordered family, and the sign of the cross.

The final activity of the day before dinner was given by an Our Saviour’s Parishioner and local knot-tying expert Scott Marshall on Mary–the undoer of knots–visit his knot tying youtube page here.  Marshall explained the history of the devotion and its connection to Pope Francis while teaching the men how to tie practical knots for everyday activities with the history of knot tying. Some of the men professed a lesson in humility with the experience.

The evening ended with dinner, a business meeting for the diocese, evening prayer, adoration, and confession.

Sunday morning began with morning prayer, mass, and ended with Breakfast and our send out mission given by Our Saviour’s Parishioner Bob Zeller giving us the wisdom of the trials he’s experienced in his own spiritual life.

Learn more about the Legion of Valor at the diocese webpage.

Pilgrim of Christ, Husband, Father, Catholic Catechist, and an aspiring historian. View all posts by Phillip